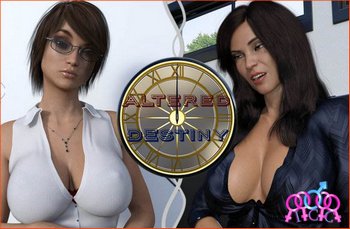 You, the MC and your best friend, Kimberly stumble upon an ancient artifact. Upon touch you witness a vague catastrophic event that takes place in the near future. Unbeknownst to it's true meaning, you both are then linked to another timeline nearly two decades into the past. While you may freely travel between these two timelines of the same world, you must figure out a way to prevent a catastrophic event that is lurking ahead.

v0.05c
- You weren't able to revisit Silvia in the hot tub after the initial scene. Fixed
- If not taking a picture of Gwynn at night the first time given the option, it wouldn't save the photo to your camera when attempting again. Fixed
- Some scenes that happened between going to sleep and waking up the next morning didn't pass the day forward. Fixed
- Spelling/Grammar Errors

Changes from V0.05a:
- Kim should now not be in her bedroom when helping with the dishes.
- You're supposed to be able to rejoin Silvia in the hottub if you wish, she didn't show up anywhere in the afternoon due to a mistake in the code. Fixed and now rejoinable!
- Penny should always be somewhere when she's home. Either in the kitchen in the morning, laundry room in the evening or bed at night.
- Fixed the bug that made you go into the changed timeline if you hit the "back" button on the "GLOBE" demo in the early game.
- When trying to upload pictures to your computer BEFORE doing Gwynn's night scene, it gave an small error. Fixed.
- With the new content finished, when doing the camping event it would soft-lock you from finishing as the scene would now progress further. Fixed.
- An very rare occurrence that happens when you would sleep with Ava the night before Natalie starts her Science class. Fixed
- Added a phone text to have Kim remind you that you can borrow her skateboard if the player hasn't after a few days. More of just a reminder.

v0.05
Update Notes:
- New character progression quests/scenes that mostly involve Natalie, Lily Perl, Gwynn, and the new voted character, Ava.
- New location: Tavern. It resides on the East side of town, so borrow Kim's skateboard to reach it.
- Made the 'handholding' cheat guide be ON by default. If you wish to play without an obvious guide, you may turn it off by retyping it within the cheat menu.
- Fixed a bunch of spelling, grammar, continuity errors, quest bugs, yadda yadda, etc.