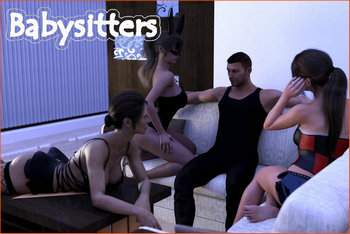 You play in a role of a quite known and popular modeling photographer. That's how you met the woman of your life and despite her already having a kid (hot grown up girl now), you married her. It didn't take much time and you managed to give her your own child, so wanted boy. It seems for you that all dreams came true... however, your wife starts to get frustrated after some time... especially due to fact that while you're photoshooting hot girls in their bikinis she must take care of your son diapers. She insists she wanna get back to work and materialise her skills as event manager. You fully support her in this decision, but problem is she expects now that you're going to spend much more time with housework and son's diapers. However, that is something you can't afford as you're at the top of your career. Older half-sister is not the solution at all, as she is quite spoiled, spending all the free time with twitching how she plays the games or makes her make-up. Yeah, you realise that you were too soft on her, but every time you wanted to slap her face or spank her ass for being so arrogant, you just could not... she's is not your daughter after all. The only solution is to hire a babysitter...​

v0.01b Fix
Added scene Gallery in the Main Menu
Lot of grammar and phrasing fixes after additional proofreading by Burt
Fix of Angela stat box (points were not updated and name changed from Angela to Angel)
Increased size of thumbnails in Save/Load section
Background and Main Menu music "pref" adjustments (adjusting through Music Volume instead Sound Effects Volume)
Compiled Android Version
We decreased file sizes for lower space requirements on your disc.
Other minor changes/fixes in the code (added NTR OFF variable which was missing)