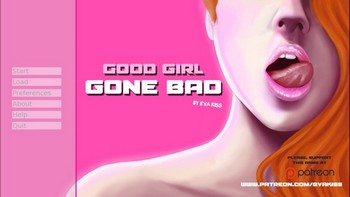 Chengelog
v1.2
Added Jasmin DLC
v1.1 Alpha
Added Nat DLC
v.1.0 Final
Hi guys! So this is the final v1.0 update. I'm still coming to terms after having finished this colossal project (even though there's still some extra work and polishing to do!). Looking at it now I can proudly say GGGB has more tan 1 million words, almost 850 interactive menus and more than 7.500 separate images.

After more than 2 and a half years this game can be played how it was originally intended, from start to finish. It's been a lot of work and I hate to have taken so long, hopefully it's been worth it. I've tried to take into account as many choices and variables as I could to craft the endings, giving you specific scenarios and consequences to your actions. I want each player to have the feeling the world and characters react and change to their choices in a meaningful way, hopefully I've been able to reflect that on the endings.

I'd recommend you start a new game a play all the way through to the end, that way you'll get to experience GGGB as I intended since it's conception. Then you can come back and check how the endings change with your other playthroughs. If you go directly to the ending from a previous savegame I fear the experience and impact can end up feeling a little underwhelming jut by itself, but I can't be a good judge about it, since I'm the creator... Also, some of you might find there are some specific paths or npc's that are somewhat neglected in the endings(NAtasha, Jasmin, cuck Eric). I plan on adding a bit more content about them in v1.1, but I had to prioritise what to include in v1.0. I have a lot of ideas and I wanted to do many things that I had to cut, or I would never finish this off! They say sometimes less is more, and I have some trouble implementing that, but there's a limit to how many branches, complexity and content I can manage! But as I said, I will add to it in the near future.

In any case, however you choose to play and experience it, I hope you enjoy GGGB's experience and find it satisfying! As always, let me know if you find any bug or inconsistency and please, write down your impressions and opinions!