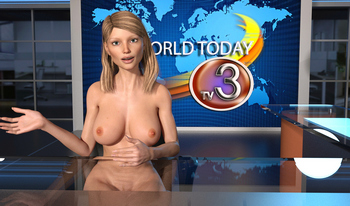 Leanna Marsellies is a journalist with an unhealthy attitude towards other people. As you bond over the course of a couple of weeks, your friendship and the facade of Leanna's bitter personality begins to break down.​..

Chengelog 1.3:
-Added a checkpoint where the game is saved. This was something I was just going to add in the ‘complete’ version of the game. It’s why there is the slightly out of place image saying ‘the next day’ at the end of day one. Since so many people were requesting it, I though I’d just add it. Now, if you fail, you only go back to here rather than starting all the way back at the train again.
-Easy difficulty setting added.
-Bugs fixed. It looks like the main one was the removal of a bug at the strip club where you could gain and extra ‘minus’ to Leanna’s facade. This caused a new bug as players weren’t able to lower the facade enough at the apartment.