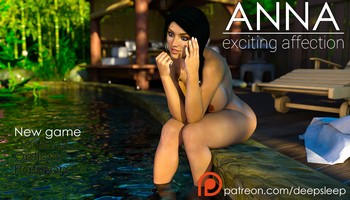 Chengelog:
Chapter 2 v0.7
Please keep in mind that saves from the regular version are not working correctly in the Visual novel.
We have finally finished working on the v0.7 release of Chapter 2 and it's called A Party to Remember.

Old save files should work but we have included a save file that starts at the beginning of the update as you might miss Earl's scene.
This update is built more about the corporate party celebration. There is a pre-party scene to warm girls up that is followed by the main event at the nightclub we have been introduced to at the beginning of the game. This time I could use the new GPU in full potential and you can see that there are a lot of characters in one scene. There are two separate outcomes. One is without Jeremy and one is with him. You can't have both of them. I think that it makes the game a bit more interesting and it makes your choices more meaningful as Anna is totally different in both of the paths.

Added: More than 300 New Renders and 16 New Animations,
Fixed: Some major and some minor logic, bug fixes, Typo fixes
Still, a lot of things are planned in the future and might change both functionally and design-wise. This is a beta version, but you should be able to play through without major bugs and get all of the scenes.

Choices now will have a lot more impact and different content so you will have to play through multiple times to get to see everything. There will also be more or fewer choices depending on your previous path. You can also miss some scenes as not everything is mentioned in the journal, so read dialogues :)
Collectibles are images of Anna and other characters out of the game in different settings. They can be in different places at different times of the day. So far there are eight, and more to come.

Final scene list:
The scene at the basement, both with Ethan and Jeremy, Memory scene, Pre-party at Emily's, Party at the nightclub, Emily and Brandon, Anna and girls, Jeremy with Diane and Anna.